The girl spoke a monologue which included the words “Is that all there is” sounding very much like a song that could have been sung by Roxie Hart. A colourful version of Chicago the musical came to mind, then the first model stepped out screaming new age 1920s and 30s glamour.

The show was titled ‘Birds Of Paradise’ and one by one the showgirls came adorned in bird related details such as feathered collars, birded embroidery and feathery heels. These Exotic birds inspired the colour palette for the collection – Purple, yellow green black and blue. Cutsie coloured head bands were placed on tucked in mid length bobs and the lips were a daring shade of tangerine. Horizontal stripes were mixed with bold patterns and tailored shirts were placed with above the knee skirts. Tailored blazer suits were work smart and age friendly, whilst the racy side of the collection included flirty backless dresses that contained a certain air of grace and class.

The show finished with a loud applause that was prematurely cut short by a silence. As the models exited the stage, the audience noted down the credit that need be made in order to do this collection justice. The Dutch sister duo have successfully won the hearts of the British fashion industry. 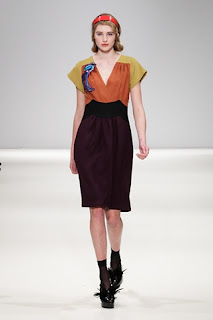 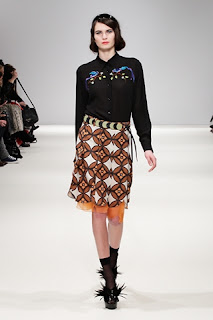 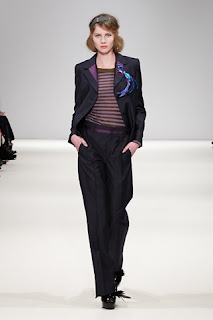 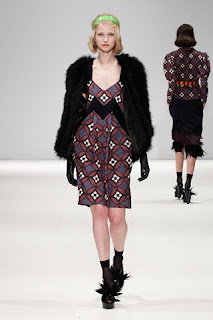 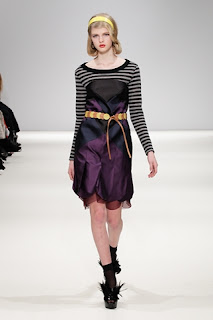 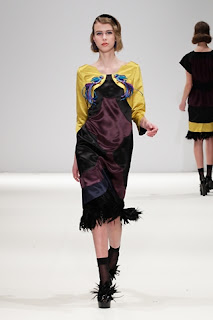 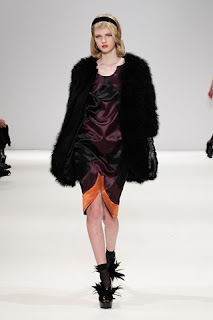 Words by Jennie May Thompson