Despite sewing traditionally being seen as a ”˜woman’s job’ there are still few women running sewing factories in the UK. On International Women’s Day we take a look at some of the inspiring women that are changing the face of garment manufacturing in Britain.

I received a call a while ago from a TV researcher asking if I could recommend any female sewing factory owners for a programme they were planning.

I know A LOT of sewing factories in the UK. I mean hundreds, if not thousands. And how many could I think of that were owned and run by women? It was less than a dozen. Which is disappointing when you consider that the vast majority of workers in sewing factories are women.

This low rate of women in top jobs in manufacturing reflects a survey carried out by EEF. They looked at the amount of women on the board of FTSE 100 manufacturing companies and found that the figure was 23%.

Yet I do think that the tide is turning.

This is in part due to the fact that as more small businesses look to manufacture in the UK, so they consider setting up their own small workshop to produce their products. It not only cuts out the cost of a manufacturers overheads, but also makes them the master of their own destiny.

Take for example Kate Holbrook, the founder of Turtle Doves. She set up her sewing studio three years ago and now has 30 people working for her, of which only two are men. Kate says of running her sewing factory,

“It may appear, from the outside, to be about the art of making things but I think that women make successful factory managers because it’s actually about communication and relationships above all and those are skills many women have.”

Another brand making it for themselves is Dawson Denim. Kelly Dawson runs a sewing workshop in Brighton with her husband Scott. Having worked in fashion for two decades Kelly could easily have chosen to outsource the manufacturing of her denim brand to a third party. But instead chose to make it all inhouse.

This personalised service means that her customers know the provenance of every garment that they buy from Dawson Denim, most of which has been made by her own fair hand.

Yet not all female factory owners go into the business because they have the sewing skills.

Kate Dawson, the founder of The All-in-One Company, set up her factory knowing nothing about garment production. She did so because she wanted to make a product that was bespoke to each customer, and realised that manufacturers were not keen on making orders of one! She now has a dedicated team of ladies working for her and is an inspiration to anyone who’s looking to make a unique product in Britain.

From my own experience of all the places that I have visited over the years, I do notice that women in sewing factories often run a tight ship. Manufacturing is, after all, all about managing people and timetables, something that women are very used to doing when they have to juggle the myriad of activities that modern children get up to after school. 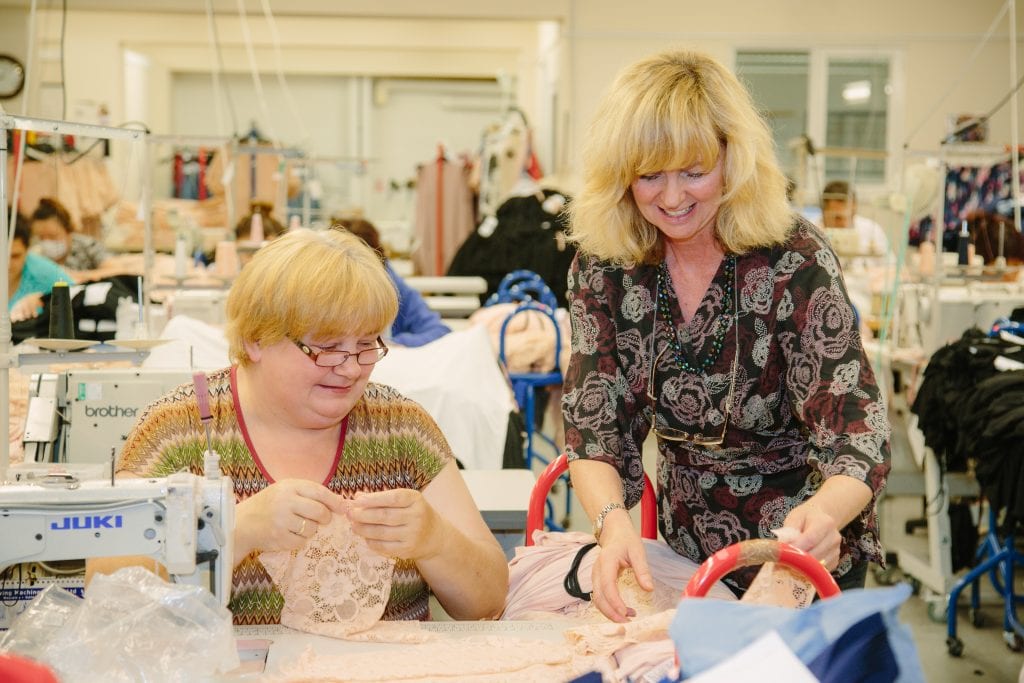 “Manufacturing is so complicated but so rewarding,” says Jenny Holloway, the owner of Fashion Enter, a social enterprise factory which manufacturers for everyone from ASOS to M&S.

“I never set out to be a factory owner when I was a senior buyer for the Arcadia Group!  However now I am in this esteemed position I would never have it any other way ”“ every day is different, every day is challenging and actually I now wonder how I was ever an effective Senior Buyer without knowing how to construct and cost a garment.”

But Jenny says that the path to running a successful sewing factory has not been easy. “Its taken 9 years to achieve the position of where I actually feel confident in all aspects of manufacturing but I am not arrogant enough to think that I could do this job without the wonderful team of the factory manager, production manager, QCs,  machinists and pressers.”

“I do think this is where woman have an advantage of being able to multi task, are not afraid to ask for advice and guidance when its required and actually just become so darn determined to make a job work.”

That hard work and determination have certainly paid off for Jenny. Today her factory has a leading status in the new Fast Forward audit, only two companies out of 360 have this accolade with ASOS.

I hope that going forward we will see more and more woman taking the lead like those I’ve mentioned above, and start to set up or take over the running of sewing factories in the UK. It certainly seems like the modern woman has all the right skills for the job!

You can read the article by clicking here.