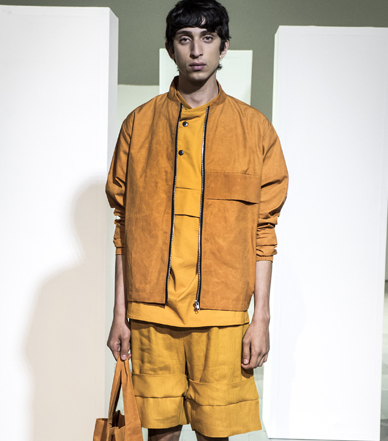 This season the Phoebe English presentation was set within a labyrinth of white panels, acting as the backdrop for a collection which played with notions of opposition brought together. English’s classic relaxed monotone aesthetic was uplifted with a full look of orange into the otherwise subdued colour palette of rain cloud gray, black, off-white and marine blue. Utilitarianism ran through the cut of every piece, and textures included waxed cotton, waffled linen and shirting. Bridal tulle, sequins and taffeta were also utilised throughout the collection, adding subtle juxtaposition to the otherwise minimalist offering. This collection (including some pieces produced by Fashion Enter’s highly skilled team at the Fashion Studio) also marked the merging of the Phoebe English Man and Woman lines as part of their womenswear offering is made from unused menswear material, following the current and much-needed fixation with sustainability in an industry which at its core revolves around producing excess. 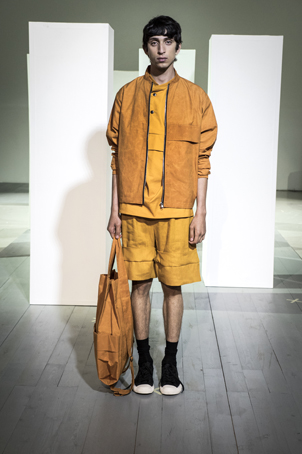 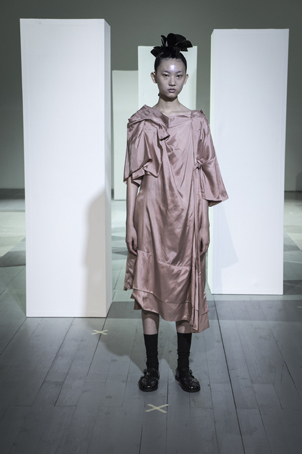 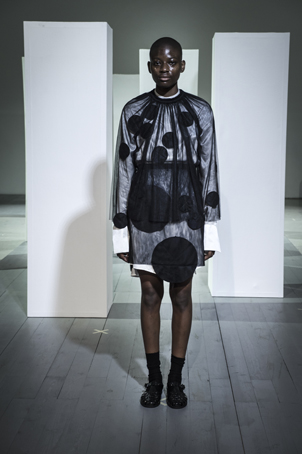 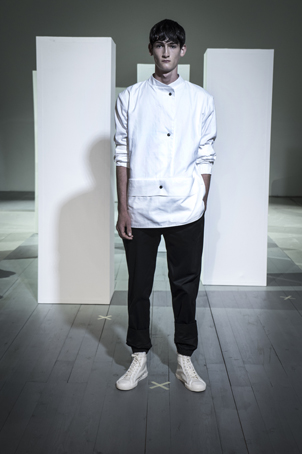 From the get-go the Xander Zhou show created anticipation for the attendees; the invite was not the ordinary sheet of graphic card but instead a sleek black credit card offering the service of an ‘your very own individual defence plan so that your personal records remain uncompromised’. Crashing, almost overwhelming, music filled Southbank’s Queen Elizabeth hall while we waited on wooden benches – that felt very much like we were at a fashion week school assembly – for the models to materialise.

The first model strode out in jeans, a vest and holding a plastic pregnancy stomach. I was immediately intrigued. The alien-esque Star Trek vibe yet intensified throughout the show as models came out in a variety of looks (which were indeed ‘lewks’) from hairless to golden to wearing striking ice blue contacts to a highlighter-yellow gelled wig. Models swarmed around the showspace, every new character adding to the crowd and creating a performative alter-universe in which only Zhou’s vision existed.

The show climaxed on the final look of a 3-D wing piece of sorts which featured towering green panels with white hands attached in a rainbow, the crowd dispersing and the audience left trying to process the streetwear-meets-sci-fi offering which we had just been exposed to. The collection itself was a mix of misty blue, fuchsia, green, grey and scarlet, with textures ranging from sheer nylon to acid wash denim to head-to-toe brown towelling. Bold statements of self-affirmation peppered the press release proclaiming: ‘I am not like everyone else’, ‘I only release authentic expressions into the world’ and ‘I am the only one like me’, announcing that ‘my style will be remembered well past the time when the sun begins to collapse and consumes Earth in about 4-5 billion years.’ This was a show that did not fail to disappoint. 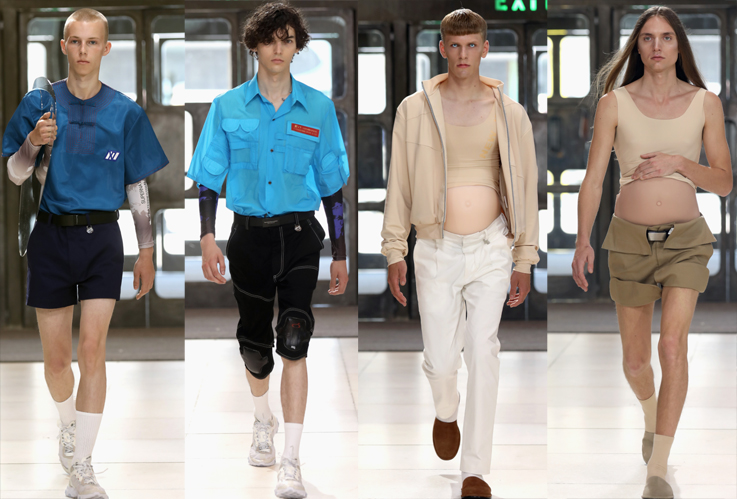 Michiko Koshino took us on an island getaway this season – models wore shoes adorned with foliage; held coconuts which they intermittently sipped from; and a select few even donned leafy headgear. The greens and florals in lightweight cotton and linen reflected the usual wardrobe in the tropical paradise of Hawaii. Silhouettes were simple and relaxed with comfortable bomber jackets (one of which was her signature inflatable), loose shirts (the exception being one extremely cropped skin-tight long-sleeve top), dungarees, and wide cargo pants. There were occasional bursts of neon in neckties and in what looked to be a dress underneath the inflatable bomber and although the colours may have seemed jarring and unnatural, it was, in fact, reflective of the vibrant, electric nature of much of Hawaii’s flora.

Effortlessly cool, Michiko Koshino shows us that streetwear needn’t be limited to slick city outfits in shades of grey and black and can instead evoke a fun jet-setting traveller who doesn’t take himself too seriously. 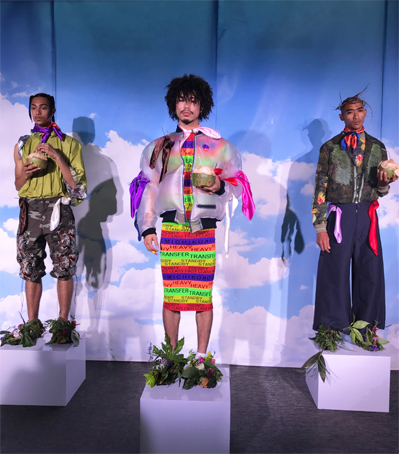 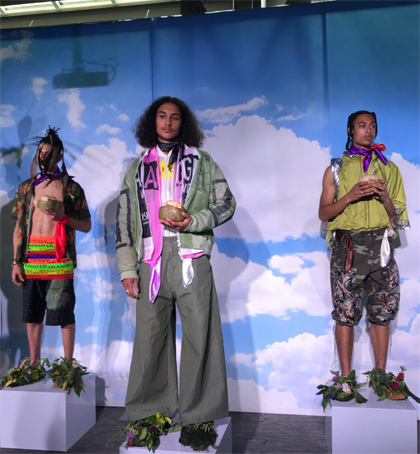 The DANSHAN presentation focused on the ‘absence of sensitivity’ in modern male life and explored this separation of emotion and behaviour though their collection – a perpetually current and eloquently explained concept (the press release was written by Reba Maybury who I am a big fan of!). Models were perched on 3-D white rocks planted on a mosaic blue sea, with abstract faces painted across the sides of faces mirroring the shapes on the floor. The clothing itself was a mix of textures from a brilliantly shiny bin-bag-esque look, to relaxed silk shirts, to stiff cotton shorts and utilitarian jackets. A classic colour palette of navy, white, black and varying shades of khaki grounded the collection, with unexpected cut-outs and asymmetric silhouettes elevating the minimalism whilst adding a sense of vulnerability. Models wore identical black Dr. Martens and pulled up socks on their feet, and it appeared little was missing from the simple yet beautiful collection. The press release probed the seemingly universal question, ‘Do you let sensitivity flourish through your nerve endings, allowing its journey to enter into that uncertain place of vulnerability? Or does that scare you? Do you want to block it out? Is it missing?’ 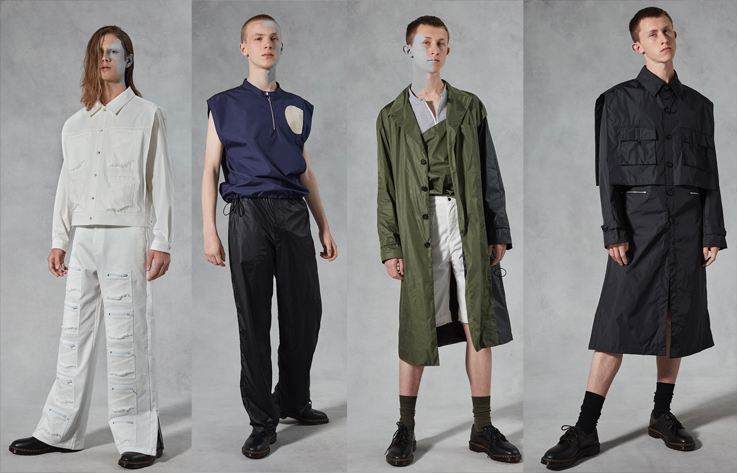 SHO – Something to Hate On was one of the younger labels on the schedule this season, having only been established in 2016, but they have undeniably already carved out a space for themselves. Formed as a creative platform for young, emerging artists to exhibit their work, their events are immersive and interactive, usually taking shape as parties, pop-ups or exhibitions. This season, their Bolt capsule collection was an expansion of their original black and white designs, which are now fabricated in new colours and textiles. (Side note: words cannot express how much I want the entire purple velvet tracksuit.)

Through a collaboration with artist Kai Schacter, we see denim, cotton, and cashmere pieces with seemingly random smears of paint on them. These have, in fact, been carefully crafted as an ode to Kai’s own paint-covered wardrobe during his creative process. A partnership with Palmer Pouch, a utility workwear brand, has also resulted in a boiler suit as well as pouch-like bags which serve as both functional and stylish streetwear.

Another fact worth mentioning is the use of exclusively black models- gotta love that representation! Let’s hope more designers begin to consider diversity in their casting choices; even though we’ve made significant progress in that respect, there’s still a long way to go. 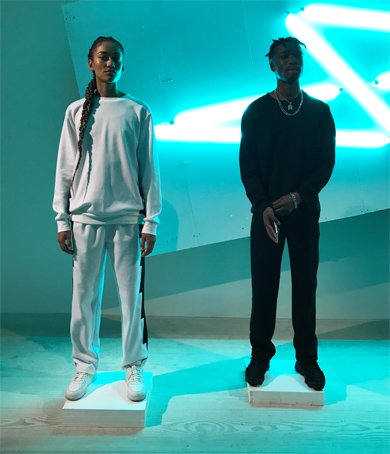 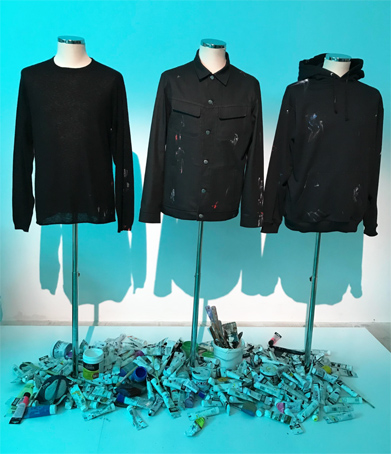 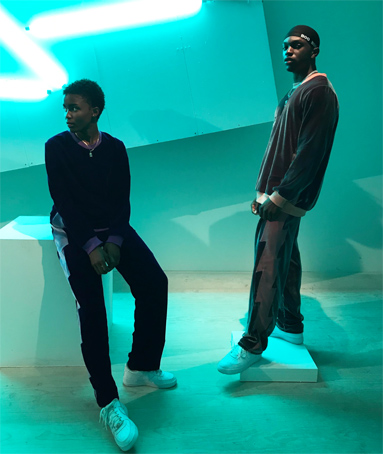